What exactly is a TIRZ or Tax Increment Reinvestment Zone?. It’s actually an economic development tool. The Borger City Council recently created Reinvestment Zone #1, Central Corridor as a means to address several high priority issues, such as lack of housing, downtown revitalization and economic diversification. The theories and concepts involved with a TIRZ can be pretty complicated, .So we have answered 9 common questions below to help our citizens understand and be more informed about the TIRZ:

What is a TIRZ?

TIRZ stands for “Tax Increment Reinvestment Zone.” TIRZs are used as forms of tax increment financing (TIF), which is an economic development tool to incentivize both development and redevelopment. A TIRZ is not a new tax. Instead, it establishes a “base tax value” for a designated geographic area when the Tax Increment Reinvestment Zone is created. Once that base tax value is established, a TIRZ reallocates the additional ad valorem property taxes in the zone.

So what exactly to does that mean? Basically when a TIRZ is created, the City of Borger records the current value of property at time of the TIRZ creation for the properties within that zone. This number becomes the “base tax value.”

Each year, within the TIRZ, the property taxes collected up to that “base tax value” number continue to go into the City’s general fund, as most taxes do.

But as properties in the TIRZ develop and become more valuable, any additional property taxes collected, over and above that “base tax value” number, go directly into a TIRZ fund. Those TIRZ property taxes can only be used within the TIRZ, and can be used for infrastructure, facade programs, landscaping, streetscaping, economic incentives, land remediation or practically any type of public enhancements to the zone. 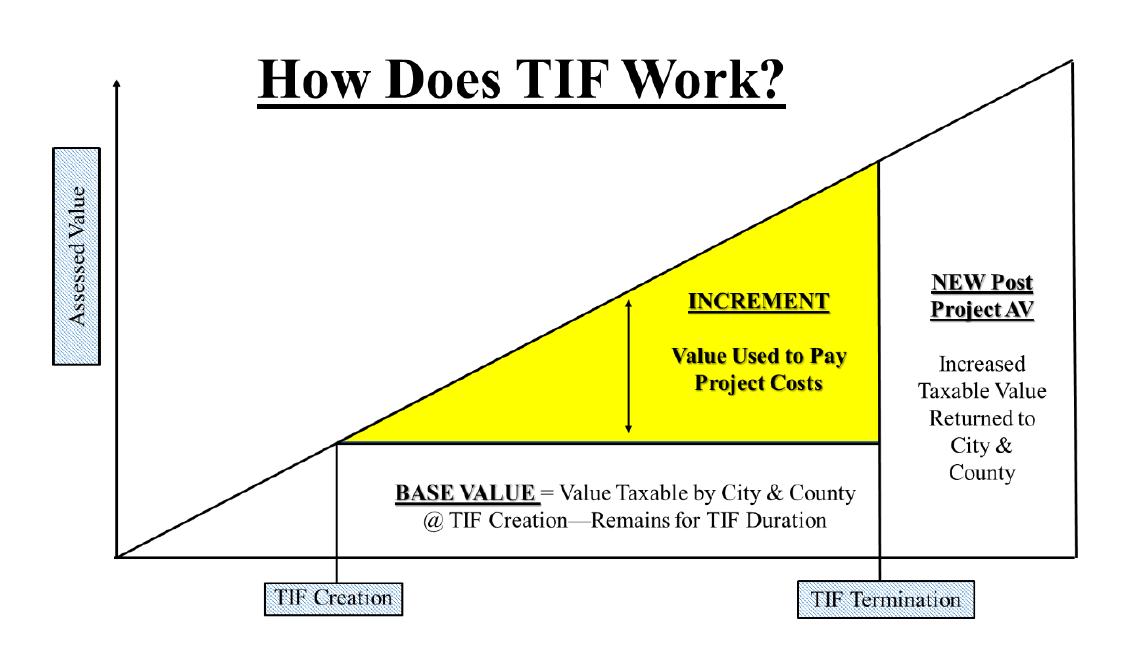 So, ideally, you create a TIRZ when property values are low. That means the “base tax value” number will be low. And that means that as property becomes more valuable, a higher percentage of taxes end up going directly into the TIF fund, which can only be used to continue improving the TIRZ.

A TIRZ can last anywhere from 20 to 30 years. So you have to realize that the return on your investment is not going to be overnight or even in one or two years. When the city makes the commitment to create a TIRZ, it’s a several decade commitment. And you’re not going to see the full potential of that development right away. It is going to take 10, 15, 20 years before you really start to see the benefits of creating the zone.

What does a TIRZ do?

A TIRZ is a way that the City can divert tax dollars from the general fund to be utilized in a specific zone within the City. It also allows us to partner with other taxing entities, like the School District and the County to leverage combined efforts. But what does that really do?

A TIRZ is used to jumpstart development in an area of the City that may not otherwise develop, for a variety of reasons.

The TIRZ jump-starts that development to get things moving a little bit faster and, hopefully, starts generating tax revenue. That additional tax revenue goes into the TIRZ when its property taxes value increases.

But there are also other taxes that get generated from new development – like sales tax revenue – and those taxes don’t go into the TIRZ, but they still benefit the City almost immediately.

What are the Pros and Cons to a TIRZ?

The benefit of creating a TIRZ is that you can direct and start to see development in certain areas that you may not otherwise have seen. TIRZs allow the City to take a more proactive approach in economic development, and allow the City to use tax increment financing as a tool to recruit businesses that may otherwise not have considered the City of Borger.  It also allows other taxing entities to contribute and participate in zone.  Borger Independent School District and Hutchinson County have both elected to participate at 100% of their tax increment into the zone.

The City, County and School District all benefit from economic expansion and program development in the zone.  Lack of affordable house hinders economic development and teacher recruitment.  Population growth will benefit the School District and the County as well.  Problems are community wide and the TIRZ allows a coordinated approach to solution between multiple government agencies.

There are some drawbacks to utilizing a TIRZ. Probably the most notable drawback is that fact that all of your property taxes, above and beyond your “base tax value” number, go into the TIRZ.

This is a good and bad thing. For the TIRZ, it’s great.

But for the rest of the City there are other things to consider. There are City support services, such as the police and fire departments, that the City has to pay for out of its general fund. And the property taxes that the growing, and increasingly valuable, TIRZ is creating don't go into the general fund to help pay for those departments and services.  However, the possible increase in sales tax and development outside of the zone that is in response to development within the zone would go to the general fund.

How is a TIRZ Managed?

Every city is a little bit different, but in the City of Borger, a TIRZ is managed on multiple levels:

How many people are on the TIRZ board, and how are they appointed?

A TIRZ board is made up of seven (7) individuals.

The remaining three (3) positions are appointed by the Borger City Council, one of which must be a person who does not currently hold any other elected or appointed office (A citizen representative).

What areas are included in the TIRZ

Reinvestment Zone #1, Central Corridor runs from the south city limits almost all the way to the northern limits.  It includes areas that could be ideal for new residential construction, areas which are prime for revitalization (Northside Addition), the central business district and the old Borger Shopping Center area.  The below map shows the zone: 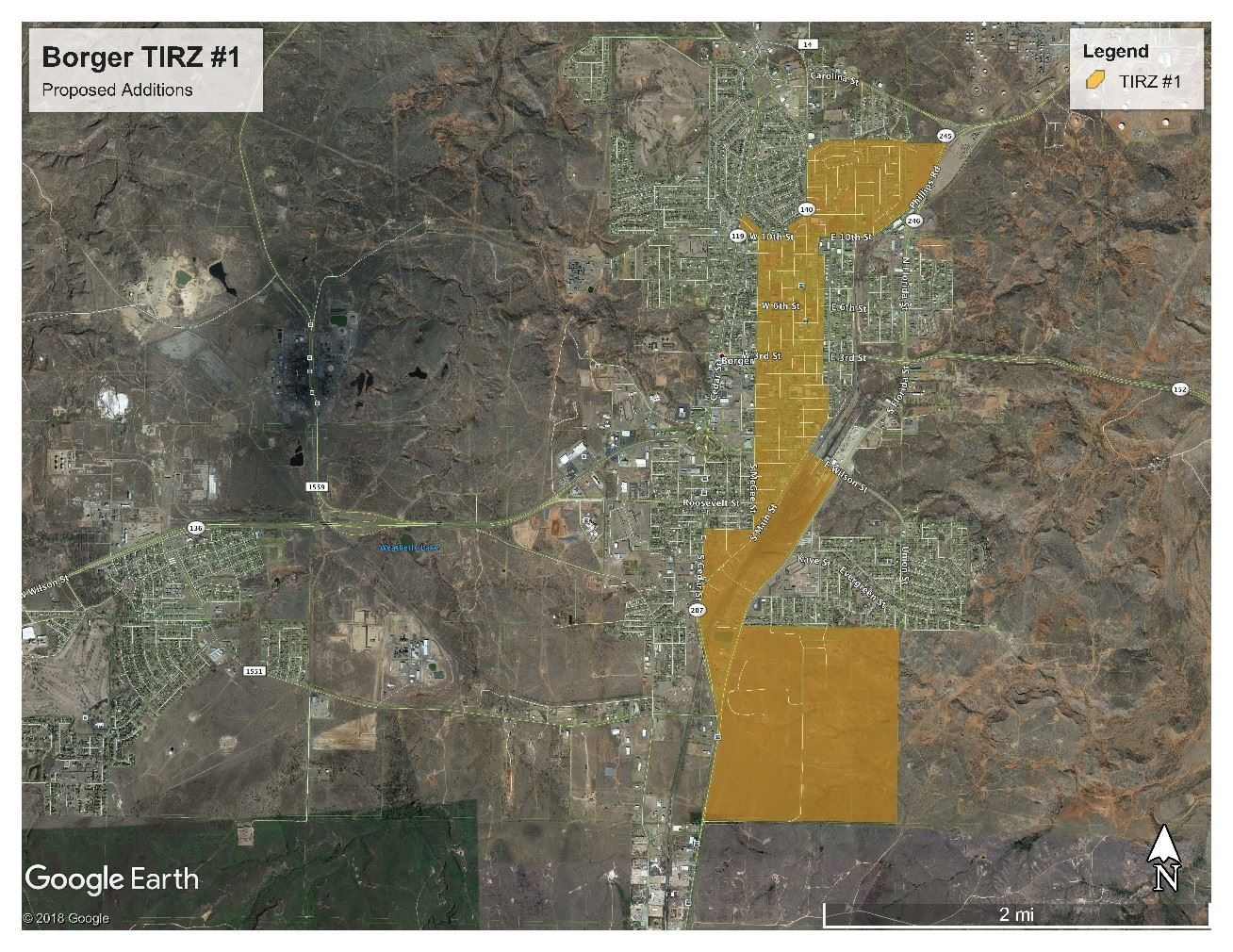